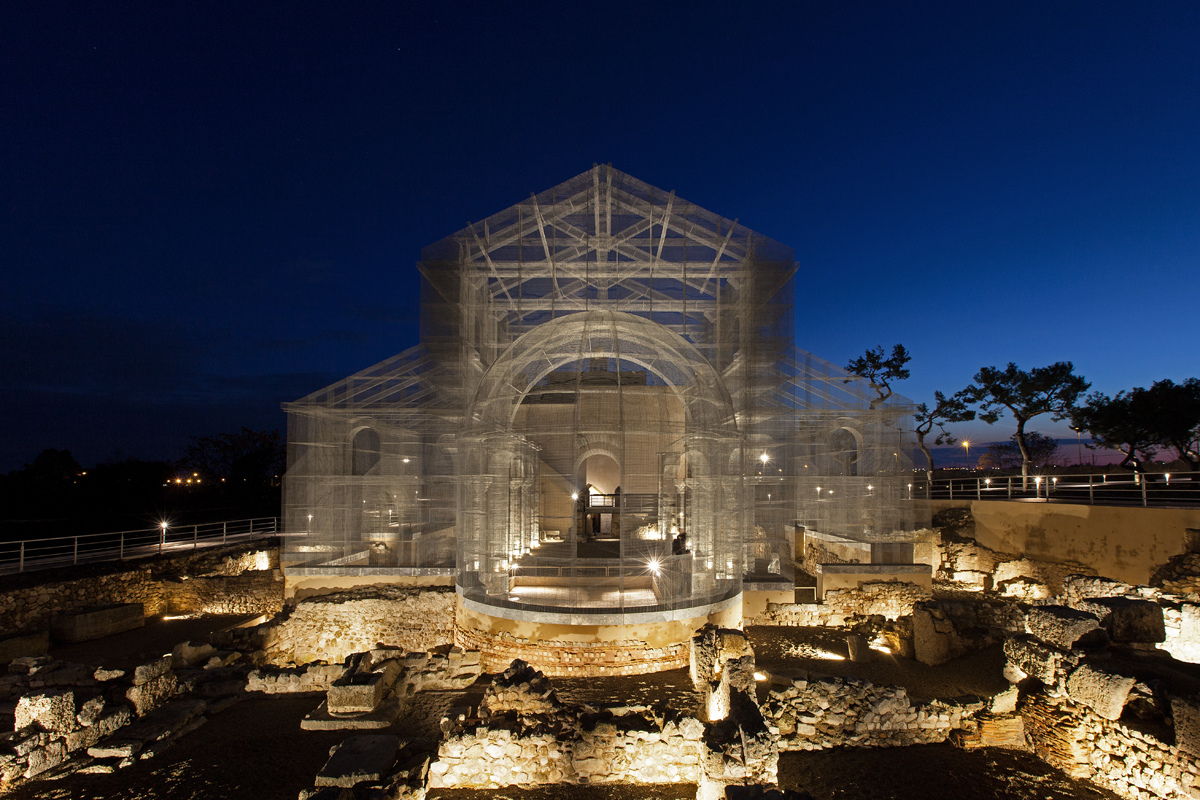 To breathe new life into the ancient Early Christian Basilica located in the Siponto Archaeological Park, in Puglia. An ambitious project that found, within Edoardo Tresoldi’s ideas, a path using an unusual and courageous implementation: a majestic and impressive structure, made of entirely of wire mesh. Our wire mesh. See below to see all about the project in detail.

The Siponto Archaeological Park, located in northern Puglia, is home to important remains which in particular testify the strategic importance of the city of Siponto in Roman times. Amongst the jewels kept in this area, are the remains of an Early Christian Basilica, characterised by three naves and a central apse and enriched by precious floor mosaics.

The Ministry of Cultural Heritage and Activities, as well as the Archaeology Superintendent of Puglia, have long believed in the potential of a place so full of history and charm, and have allocated 3.5 million euro to fully enhance the area.

Among the various proposed projects, one in particular has emerged immediately as the most ambitious and compelling: to breathe new life to the Early Christian Basilica of Siponto. The challenge was accepted by Edoardo Tresoldi – an Italian artist at 28 years’ old who has been producing fascinating wire mesh sculptures and works of art since 2013. Edoardo has created, together with his team, right on the foundations of the basilica, a majestic yet light structure, which works in perfect harmony with the splendour of the architectural and natural beauty of the surrounding area.

A structure that gives new life to the original design of the Basilica through the exclusive use of welded wire mesh, produced by Cavatorta.

The project numbers are impressive:

The result is incredible. The new Basilica fits harmoniously in the context of the Archaeological Park of Siponto, juxtaposes with the delicate volumes of the splendid Romanesque church located a few steps away, built between the late eleventh and early twelfth century.

Natural light during the day and a well-designed lighting system during the night gives rise to different and changing forms and perspectives, all of which surprises the eye and communicates the proud grandeur of the original Basilica, in a very successful dialogue between the ancient world and today’s contemporary language.

The project, entitled Where Art Reconstructs Time, was presented a few weeks ago, in March. Tresoldi on the project:

“… The path began with a research of historical records with experts, archaeologists and professionals of cultural heritage. When this topic came into my world, I began to imagine a sort of return of this great building, as if it were part of the historical memory of the place. I envisioned being able to draw in the air, while maintaining direct relations with this territory.”

The images speak for themselves: the volumes of the Basilica emerge before the eyes of the visitor; powerful and at the same time almost immaterial, thanks to the embroidery of wires.

THE CAVATORTA MESH AND THE PROJECT OF THE NEW BASILICA

The new Basilica of Siponto was built using exclusively Cavatorta welded wire mesh and specifically Esafort wire: a galvanised steel mesh known for its great strength and at the same time, its malleability.

Two essential requisites for the construction of the Basilica:

These features are the result of Galvafort Process: an exclusive strong hot-dip galvanised process, developed by Cavatorta. Specifically, Esafort offers:

This project offered our wire mesh the opportunity to express itself in a very unusual and impressive form, in which both artistic and technical characteristics strike a perfect chord. The end result is visionary and an exciting project, the result of creativity and talent, and we’re extremely proud to have contributed to its realisation.