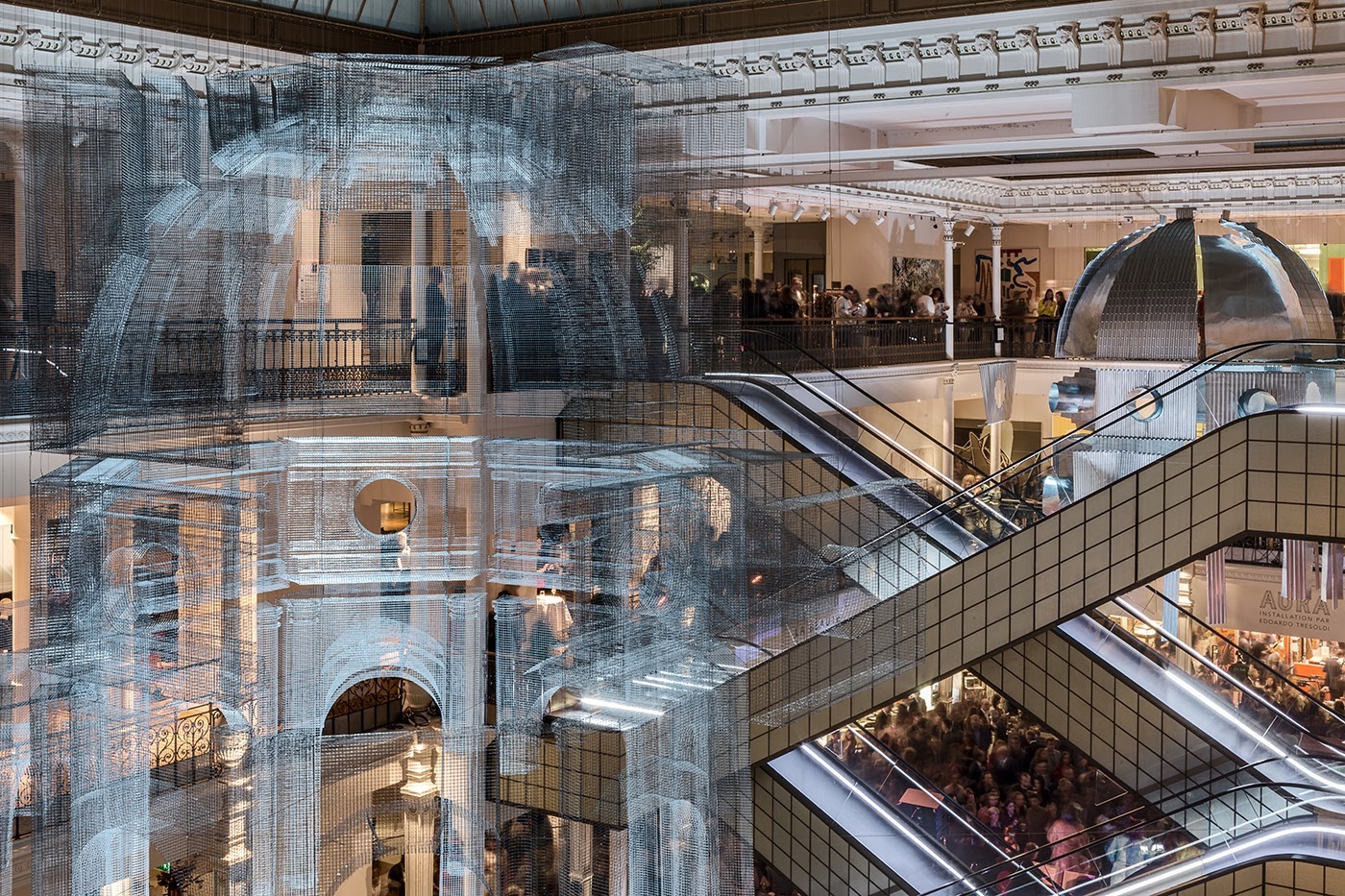 “Aura”, Edoardo Tresoldi’s work of art, pays homage to the immortal style of the Italian Renaissance and Neoclassicism and celebrates architectural ruins as majestic witnesses of the passage of time. Once again, the work is made of electro-welded wire mesh by Cavatorta.

The conception of this work rests on a deep reflection on the concept of aura, described by Walter Benjamin as a singular interweaving of space and time, the unrepeatable apparition of a distance. From this point of view, the architectural works of the past preserve the very essence of the aura and offer it to those observers who are able to grasp it. Tresoldi’s work evokes the treasures hidden in ruins and enchants visitors.

“Aura” consists of two majestic eight-meter high domes, in open dialogue with each other. Almost identical in shape, they differ in materials and presence: one is made of wire mesh, the other of corrugated sheet metal.

Quoting the press release of the work:

The wire mesh artwork refers to the soul of the shape, the ethereal dimension of another world. Its subtractive aesthetic, expressed through lightness and the depiction of absence, recalls the spiritualism of nothingness, the nostalgia for the vanished.
The one in corrugated metal sheet is, instead, an organic wreck, an empty shell. Same as an abandoned nest, it is a witness to a life born therein before leaving for somewhere else; it relates to the terrestrial dimension, telling the passing of time. Assaulted by the erosion of events, it represents a return of architecture to nature, presenting itself as an elegy of the caducity of matter.

“Aura” is part of the entire DNA of architecture, recomposing its identity through a deconstruction process.
[…] the two artworks are, in the words of the artist, “like relics on display in an 18th century natural history museum. By observing them, visitors trace back the historicity of architecture through its components.

THE INSTALLATION OF “AURA” AT LE BON MARCHÉ IN PARIS

“Aura” made its first appearance in Paris, from September 6 to October 22, 2017, in the elegant halls of Le Bon Marché, a prestigious shopping centre founded in 1838 which, in recent years, has also become a first-class exhibition space with installations by artists such as Tadao Ando and Ai Weiwei, to name but a few.

In their Parisian setting, the structures were attached to the grandiose glass ceilings designed by Gustave Eiffel. They offered themselves to the eye, like majestic wrecks suspended in time and space, transient and beautiful.

“AURA” AND CONTROL FOR THE ELTON JOHN AIDS FOUNDATION

In December, “Aura” was chosen by the Elton John AIDS Foundation to provide an exceptional backdrop to Club Love, a charity event and fundraiser for the research and fight against AIDS. Graham Norton, the face of BBC, together with singer Sam Smith, hosted the event, which attracted the best of London society.

The evening featured not only “Aura”, but also “Control”: the first work by Tresoldi which expressed his research on non-matter. “Control” was first presented in 2015 as part of the “Animal” exhibition in London: eight themed spaces invited visitors to reflect on the animal world and man’s frantic attempts to control nature. From this perspective, “Control” evokes the mesmerising grace and beauty of the flight of birds, which is in itself a hymn to the absolutely unpredictable freedom and greatness of nature.

Cavatorta has been working with Edoardo Tresoldi since his first installation. To create “Aura”, the artist used Cavatorta wire mesh, and specifically Esafort, a type of electro-welded mesh in galvanized (zinc-coated) steel, which remains ductile and at the same time retains an inherent strength . These two properties were key when it came to give shape, through a skilful work of bending and welding, to the majestic dome that is at the heart of the installation.

The main properties of Esafort are:

In September 2019 Edoardo Tresoldi unveiled his new artwork entitled Simbiosi (Symbiosis). The installation can be found in the famous Arte Sella Park, which suffered serious damage last winter due to storms, but continues its regeneration, thanks to this work. Arte Sella is an outdoor art gallery in Borgo Valsugana, Trentino, where artworks blend with […]

After his highly success work “”, made for the famous Parisian shopping centre Le Bon Marche – Rive Gauche, and the majestic reconstruction of the , Edoardo Tresoldi has created a new sculptural installation in the centre of Barcelona. The installation of “Limes”, is a site-specific creation for the 25th anniversary of L’Illa Diagonal, Barcelona’s […]

Read more
Back to blog

A safety guarantee for people and environment
Discover more